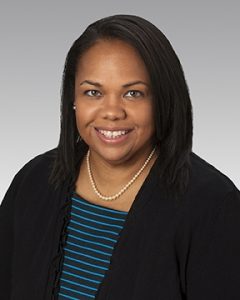 Why did you decide to work in career services?

I come from a family of educators, so I knew that if I wasn’t practicing law that I likely would have been an educator. When I decided to take a step back from the practice of law, I actively sought out positions in academia. The position in OCPD seemed like a natural fit to combine my passion for helping others and my strategic thinking skills to assist students with creating a meaningful and fulfilling career path.

What advice do you wish you had received in law school?

I went into law school knowing exactly what I wanted to do, public interest law. And that is exactly what I did coming out of law school. I wish someone had encouraged me to explore other areas of law outside of the required classes to expand my horizons. I took Federal Income Tax the second semester of my 2L year and really enjoyed the class. I took another tax class my 3L year, but I wish that I had been encouraged to explore more of the business side of law because I may have found that I liked it more than I thought. In fact, during my 14 years in big law, I found that I enjoyed business/corporate law more than I ever thought. I came to realize that I loved being a lawyer and simply found the practice of law engaging.

How do you define “success” in your current position?

There’s an old saying often attributed to Confucius that says, “Give a man a fish, and you’ll feed him for a day. Teach a man to fish, and you’ve fed him for a lifetime.” Often students come to our office asking for lists of alumni and/or lists of employers in a certain city or practice area. It is very easy to give a student a list; however this is equivalent to giving the student a fish. I believe that my role as a career counselor is to teach that student how to fish so that I am preparing them for life beyond law school. Thus, I will often take the time to show students how they can develop their own lists by utilizing the various resources that they have available to them through martindale.com, Wake Network, LinkedIn, etc. I also realize that strategic referrals to individuals play an important role in our students’ success.

Tell us something about you that’s not on your resume.

When I worked in legal services in Chicago, I was a member of a labor union. Two months prior to leaving my position to move to North Carolina, the union went on strike when contract negotiations reached an impasse. We knew that a strike was likely and in the months leading up to the end of our contract term, we were encouraged to set our court dates toward the end of the month following the contract expiration date. Local judges and opposing counsel were aware of the situation and accommodated our requests. So, for approximately three weeks in April 1997 when it did in fact snow in April as the Prince song says, I walked the picket line in downtown Chicago. Not many attorneys can say that they have had this extraordinary experience.

What was the last book that you read?

The Sun Does Shine: How I Found Life and Freedom on Death Row, by Anthony Ray Hinton. In 1985, Hinton was arrested and charged with two counts of capital murder in Alabama. He knew that it was a case of mistaken identity and believed that the truth would prove his innocence and ultimately set him free. But with no money and a different system of justice for a poor black man in the South, Hinton was sentenced to death by electrocution. He spent his first three years on Death Row at Holman State Prison in agonizing silence—full of despair and anger toward all those who had sent an innocent man to his death. But as Hinton realized and accepted his fate, he resolved not only to survive, but find a way to live on Death Row. For the next twenty-seven years he was a beacon—transforming not only his own spirit, but those of his fellow inmates, fifty-four of whom were executed mere feet from his cell. With the help of civil rights attorney, Bryan Stevenson, Hinton won his release in 2015. And it wasn’t new forensic technology that ultimately exonerated him. It was the perseverance of a handful of men and women willing to turn a mirror on the system itself. This book should be required reading for all law students.

I love to cook and I am constantly looking for new recipes, so it’s hard to pick one favorite recipe! My Pinterest account is full of recipes! Most recently, I have been utilizing my crockpot quite a bit and the following recipe has become a family favorite: