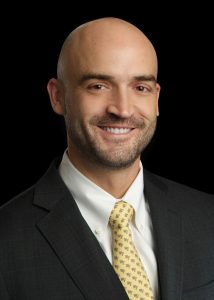 Why did you decide to work in career services?

As much as I loved litigation, I also love playing music. I started picking up more and more gigs, and I ran out of time. I couldn’t bill first or second year associate hours while also rehearsing, recording, writing, and performing. So I had to make some really tough decisions. I needed a more stable work schedule, but I also wanted to do something I was passionate about. And I still wanted one foot in the legal field. Back in 2009 I had taught high school for a few years and loved every second of it. So, education, the law, and more stable work hours? Wake Law was the right fit. I hope I can serve as an example for how versatile a law degree can be. Despite competing interests, I was able to find truly meaningful work that I wouldn’t trade.

What advice do you wish you had received in law school?

To be fair, I got a lot of great advice. I had incredible mentors including our very own Alvita Barrow, my trial coach Mark Boynton, Professor Wilson Parker, and Professor Mark Rabil. I’d highly recommend using the faculty and staff here. It’s such a tight community. Take advantage of the professors’ accessibility.

Dean Scott wrote that she wishes someone had told her to pursue work she really enjoyed. The advice I wish I had received is similar. I wish someone had told me to choose to live and work in the geographical location I really wanted. I wanted to stay in North Carolina upon graduation, but I tricked myself into thinking I wouldn’t miss it that much, so I moved home to Texas. Don’t get me wrong, I love Texas. I’m still licensed there; I’m from there; my family is there; but I missed North Carolina in a way I can only describe as love sick. (It’s funny, but Mark Rabil actually told me to trust my heart and even pointed me toward part time work in North Carolina so I could stay after graduation. So the advice was given; I just didn’t listen.) The point is this: go where you want to go. Live where you want to live. The exception is if a specific practice area requires a certain geography. In that case, there are decisions to be made. Aren’t there always?

What’s the best career-related advice you ever received?

I can’t remember where it came from, but I want to say Butchie (my dad) told me this once: working hard and keeping your head down is a fantastic way to get overlooked. Although I may have forgotten the source, I have never forgotten the point. This idea that your employer will reward you so long as you stay quiet and grind it out is at best misinterpreted and at worst simply not true in the 21st century.

It’s imperative to keep your employer apprised of the work you do and the value you provide. For example, if I stayed at the office until 9:00 pm, then I sent my supervising attorney an email (about anything) at 8:45 pm just so he knew I was still there. If I had an idea regarding how to deal with a difficult issue, I shared it with him instead of filing it away in an in office memo. Another example, if a client were to send me a small gift or thank you card, I would, as humbly as possible, tell my boss something like this: “Thanks for helping me with Mrs. Client’s case. Mrs. Client was happy with the service the firm provided. In fact, she left a thank you note for me at the front desk today. It was nice to know she thought we did alright.”

Some might argue and say that your billables will do the talking, but that isn’t necessarily true. First, flat rates are becoming more popular. Second, clients (especially insurance companies) are allowing the attorney to bill for fewer and fewer tasks. And third, as a new associate, billing is an art that takes time to learn. In the beginning, your bills likely won’t reflect the effort you’ve put in.

Keep in mind, you’re not bragging or complaining. Think of it as making a record. You’re making a record of your achievements and accomplishments so they’re not lost amidst the chaotic and fast moving nature of a law firm.

I tend to obsess on things. Sometimes I get hold of an idea or a problem, and I can’t let go. I was once drafting a brief requesting summary judgment, and the law was kind of circular. I couldn’t let go that there was not a firm starting to place to build an argument. In an attempt to pin down this circular argument, I wound up writing in circles. Before I knew it, I’d burned up the ten hours the client had allotted to spend on the brief. Sometimes done is better than perfect–especially in the law when there are deadlines to consider.

What do you do when you’re not in the office?

My wife and I have three dogs that keep us pretty busy and miserable. We also play live music. Our duo is called the Couldn’t Be Happiers, and we play a blend of Americana, Folk, and Country. We gig out about twice a weekend, and if we’re not performing then we’re rehearsing or recording in the studio.

If you could be reborn as any musician, who would it be?

Probably Guy Clark. He’s arguably the greatest songwriter of the 20th century. He lived a life of food, love, and music. Doesn’t get any better.